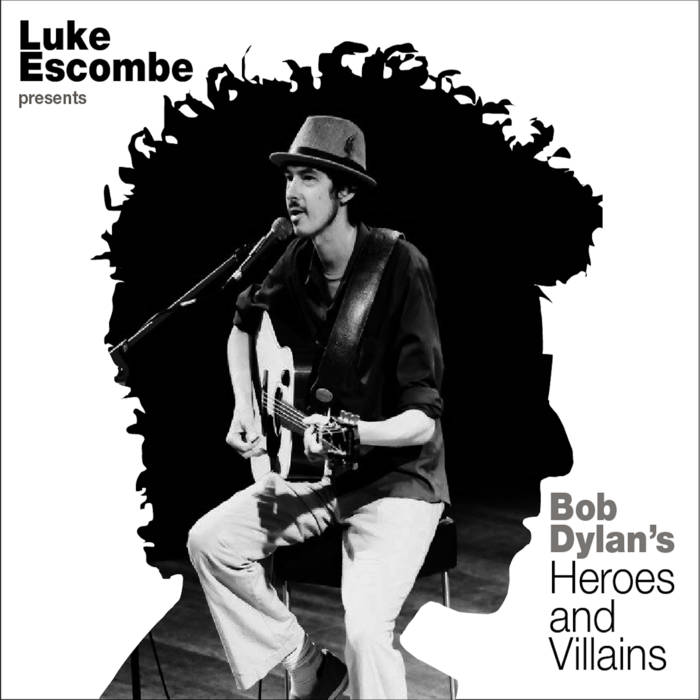 I recorded this album of Dylan covers a few years ago as a 70th Birthday present for a family friend in the UK.

I'll tell you a bit about this friend, so you can understand why I did it.

His name is G___ and he's a famous car designer. The cars he designs are fast and sexy and they win Formula One titles by the bucketload.

His house in the Surrey countryside is full of vintage jukeboxes and pinball machines and has a Drive-In movie theatre where you sit in an open-top Cadillac.

There's also a Go kart track, a manmade lake with a gazebo, a cave with a jacuzzi in it and a cabin deep in the woods where the sun shines in through a stained glass window.

All things considered it's not an awful place to visit.

As a teenager I was lucky enough to attend G___'s 50th Birthday Party, where the dress code was "crazy" and the guests included Terry Gilliam and George Harrison.

I brought my guitar with me and was just setting up my pedals to play some Hendrix covers with the band later in the night when George ambled over to say hello.

I was too stunned to think of anything to say back to him, so I just let him stand there in silence for a few seconds before walking off again, but still.....George Harrison!

The band G____ had hired for the party was a bunch of Kiwi guys who'd got the gig because they played a good version of The Beatles' "Baby you can drive my car". I can only imagine what they must have thought, looking across the stage and seeing an actual Beatle sitting in with them on lead guitar. Holy shut!

While I remember it, Jim Capaldi, the drummer from Traffic, also got up to jam with George and the Kiwis, beating seven shades of hell out of the drums and shouting out for more beers for the band. Nick Mason, the drummer from Pink Floyd, was bopping next to me on the dancefloor, enjoying the banter. I'll stop dropping names now but you get the idea.

Anyway, while it was a love of cars that first drew George Harrison into G___'s orbit, it was their mutual adoration for Dylan that truly cemented their long friendship. They were both wild about Bob.

When I last visited G__'s house, in 2015, he told me stories about George and Bob, including a story about attending one of Dylan's birthday parties in the early 80s.

"Is it going to be wild?" he asked George.

"No man, it's just going to be ice cream and magicians, but you can come if you like" said George.

Assuming "ice cream and magicians" was some kind of code, G__ rubbed his hands together in anticipation and caught a flight to the States to attend the party.

"Sure enough, ice cream and magicians, a bouncy castle, and a bunch of little kids running around" he told me. "Bob was more or less comatose at the table. Not drunk, just completely disengaged, like his mind was a million miles away"

That's the way he was most of the time apparently. His body could be one place but his mind would be away in the world of whatever song he was writing at the time. I know the feeling, I do it myself. It's what makes songwriters such terrible people to live with most of the time.

Way before all the music was accessible on Spotify, G___ had EVERY bootleg Dylan album. He used to make tapes and CDs of them every year as presents for his circle of friends, which included my parents.

My Dad wasn't really a fan - he referred to Dylan as "the old goat" - but Mum was converted after seeing Bob live at the Hammersmith Odeon in the early 90s.

Funnily enough I went to the exact same show and thought it was hands down the most inept and unprofessional live performance I'd ever seen. Compared to the type of performers I was used to seeing - Springsteen, Freddie Mercury, Prince - Dylan's complete lack of enthusiasm, energy or coherence onstage left me feeling not just cold, but vaguely insulted. If we'd paid to get in I would have wanted my money back.

It took me another ten years, and that brilliant Scorsese doco "No Direction Home", to be won over to the Dylan cause. Or what I should say is "reconverted", because I did love everything Bob did on the Travelling Wilbury's album, particularly the song "Tweeter and the Monkeyman", which I recorded for this covers album but decided not to include because I didn't like the way it turned out.

"Bob only does one take" G__ told me at lunch. "That's it. He'll talk through a song, he might rehearse it once or twice, but once tape rolls you get one shot and then he moves on". And the thing about Bob of course is that he'll never perform a song the same way twice.

I decided to take the same approach to these recordings, which is why some of the songs I was most intent on including in this collection - Jokerman, Ring them Bells, Times they are-a Changing - didn't end up making it. I just didn't like the way I sang them on the day. Maybe I'll include a link to the demos instead.

My huge thanks to Matt Stuart for providing the means, the patience and the expertise to get this album done.

These songs were recorded straight to analog tape, no redos or overdubs. That puts quite a lot of pressure on you when you're trying to get through a wordy 11-minute song without screwing up, but he made me feel relaxed and supported throughout.

G___ wasn't the only person to receive a copy of this album on CD. I also gave one to Mum and my artist friend Rick Ward, himself a Dylan fanatic and friend of George. He was the one who designed this very cool album cover for me. Thanks Rick!

G__ received a knighthood last year. Although well into his 70s he's as busy and creative as ever. Apparently Prince Phillip is now a personal friend. Every year at Christmas we get a new compilation CD from G__ filled with his favourite tracks from the year that's been. Occasionally my own songs have made it on to his compilations, alongside those of Bob, George and the other Beatles. It's quite an honour.

He sent me a card after receiving this CD and a short but much appreciated two-word review: "Great stuff".

Soaked in the spirit of the old bluesmen but with a lyrical style born of the internet age, Luke Escombe's songs are raw, raucous, subversive and funny.

Bandcamp Daily  your guide to the world of Bandcamp

Interviews With Butcher Brown and Slauson Malone, plus LP of the week by SAULT.